"We are the Arkz. We are fighting the Principal Government to protect the sanctity and civil rights of the people of Pioneer 2. ...It's only a matter of time before this germ spreads and destroys this world. The Principal Government knows this, and yet they've been blinded by their struggle for power and have chosen to ignore the danger."
— Break before the attack on the Morgue

Wilm Break (Japanese: ウィルム・ブレイク) is a major character in Phantasy Star Online Episode III C.A.R.D. Revolution. He is a member of Arkz and can often be found accompanied by the RAcaseal, Lura.

Before he became a hunter, he trained with his childhood friend, Orland, under Nef Miyama to inherit the legendary Miyama sword style. After he got his Hunter's License, he made a name for himself together with Orland. He joined the Arkz after unwillingly taking part in the OPSS Incident which traumatized him for life. He believes the Hunters are fighting for an oppressive government, and as an Arkz, he fights to protect and preserve the civil rights of every being, man and machine.

Along with his best friend, Orland, Break is training as a disciple under the legendary, yet strict, Nef Miyama. Nef decides to test their skills in a virtual reality simulation he designed himself in order to see if his young protégés are capable of working as a team, with one of the Four Heroes acting as their experienced supervisor. Although his master appointed the hero in such a position, Break refuses to acknowledge them as such until they can prove to him without a shadow of doubt that they are stronger than himself, unknown to him that the hero was one of the coveted hunters famous for defeating Dark Falz and Olga Flow numerous times.

Overtime, as they complete each trial, Break begins to feel a sentiment close to impressed that his supervisor could, as he says, keep up with "disciples of the old man." It isn't until he gets abducted by the simulation's sudden glitching and subsequent rescue that he becomes as awestruck with the hero as Orland has been for most of the trial. Break makes a promise to Nef Miyama that he will ace the Hunter's License exam and, eventually, he and Orland will become of equal strength as one of the Four Heroes. The quest ends with Break reassuring Orland that they will definitely meet the hero again someday.

Break is a battle force that boasts the most well-rounded stats of the Arkz. Not only is he capable of defending himself with his Agito replica if enemies get too close, but he can also cast powerful techniques to snipe foes from afar. This character is a good choice for beginners to learn how to play the game.

Break's character card can be viewed below. Top color is red. The combo colors on the right of the card are blue, red, yellow, orange, and purple. 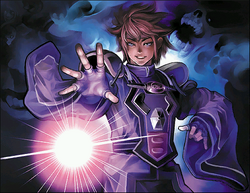 Retrieved from "https://phantasystar.fandom.com/wiki/Wilm_Break?oldid=34378"
Community content is available under CC-BY-SA unless otherwise noted.