Start a Wiki
This article is missing some information and requires cleanup. You can help Phantasy Star Wiki by improving it.
SPOILER WARNING
This section contains plot or ending details which could spoil the game for those who have not completed it.
SKIP SPOILERS SECTION

Risa (Japanese: リサ) is a character in Phantasy Star Online 2. She is an ARKS operative infamous for her lust of guns and unhinged personality.

Risa is a class trainer for rangers and gunners.

Risa is located in the Central Hall of the Gate Area.

Risa nearly shoots Kohana and says that she thought they were Falspawn, jumping in front of the group. While Afin claims that it was dangerous, Risa ignores him and says that guns are the best thing, being able to easily defeat Falspawn with them. She then gets the urge to kill Falspawn and wishes the group a good day before leaving.[2] Risa is on Themis when Falspawn appear on the ship and snipes several Falspawn, saying that even she gets exhausted from killing so many Falspawn. She then spots Ash and Afin and helps them out by sniping the Falspawn that surrounded them.[3]

Risa points her gun at Ash and wonders what atrocities he is guilty of but Ash doesn't know what she means. She then says that she likes to save the best for last and won't shoot him for now, referring to the rumors that have been going around. Ash tells her that he doesn't recall doing anything bad and she responds that kind of response is what all bad people say. Not amused by Risa's answer, Ash leaves and she wonders where he is going. With Ash being flagged as a traitor and Code ABYSS being used by Regius, Risa joins Afin and Io to kill Ash. Risa comments that she is just as sane as before and is really happy that she can kill Ash without anyone getting mad at her. Matoi tries to tell them to Ash isn't a traitor but to no avail because of Code ABYSS which makes them unable to disobey orders, not that Risa minds. Risa shoots at Ash which he blocks with his weapon. Afin holds Ash at gunpoint and Matoi shouts which breaks the trio out of the control of Code ABYSS. Coming back to her senses, Risa is sad by the fact that the fight is over but she is a bit statisfied since she had fun. She also finds it weird that Code ABYSS was nullified just like that and tells Ash and Matoi to get a move on since many Falspawn start to appear on the mothership. The trio stay behind to defeat the Falspawn while Ash and Matoi head for their destination.[4]

They are still fighting the Falspawn when many ARKS appear on the mothership and start to shoot them. During the battle, Quna reveals that the info has been tampered with and releases some other info as well about what Luther has done behind the scenes to everyone.[5] Everyone then goes to help the Council of Six to defeat the Klariskrays clones.[6] With the battle over against the Klarisklays clones, Afin, Io and Risa help the other ARKS to evacuate from the mothership when they hear an explosion. Wondering what it was, Io looks it up and Risa tells them that the mothership's degeneracy space is collapsing. Afin wonders how bad that is and she responds that it will cause a huge explosion which shocks the other two. With everything back to normal, Risa sees Ash touching Io's shoulder and yells that it's sexual harassment to touch his juniors on the shoulder. Ash looks up and sees Risa, who jumps down. Instead of apologizing, she wants to thank him for the fun she had when fighting him. She hopes that she will have more fun in the future like maybe kill each other for real and wishes Ash a good day, leaving him confused behind.[7]

Risa goes to Ash and says that darkness is immeasurable, so photons are needed to drive it away. Ash has no idea what Risa is saying but she continues her story by telling that the Photoners thought to sacrifice one in order to save the world and that ARKS is doing the same by killing Matoi to save everyone. Ash is willing to take her place to which Risa responds that he's just like everyone else and before she leaves, she wonders if having to sacrifice someone is the right choice. When everyone has decided to help Ash out to save Matoi, Risa goes to Ash once again and says that uniting an army to save one person is an inefficient plant but thinks it's good idea. Shifting between personalities, Risa states that she would be disappointed if he reached the same conclusion as the Photoners and while she hates Falspawn and Photons, she might end up liking ARKS. Now quickly changing personalities, she tells Ash to make sure to save Matoi before she temporarily shuts down and is back to her normal self. She wonders what face they are making and responds to Afin's comment that she only has said weird stuff from the start.[8] Risa assists Maria, who is maintaining the barrier, by sniping the Falspawn that are approaching her.[9] 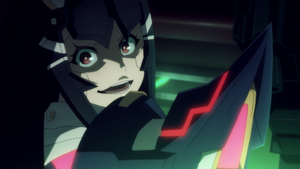 Retrieved from "https://phantasystar.fandom.com/wiki/Risa?oldid=40524"
Community content is available under CC-BY-SA unless otherwise noted.