Phantasy Star Wiki
Register
Don't have an account?
Sign In
Advertisement
in: Help, Administration of this site

The Manual of Style is the guide to editing and creating pages on the Phantasy Star Wiki.

The Phantasy Star Wiki conforms to localized naming conventions of people, places, things, locations, etc. for the Phantasy Star franchise when applicable. Fan translations are not official and will not be used unless there currently does not exist any officially translated game content (Phantasy Star Gaiden, Phantasy Star Nova, etc.).

In cases where a game is officially localized several years after the game's original release, fan translated terms will be changed to conform to the new localized text so as not to confuse readers.

Pages should always be written in third-person. Avoid the use of first and second-person, unless a direct quote is involved. In general, avoid using I, you, us, we, me, etc.

Images are a great way to spruce up a page and make it visually appealing to the reader. Acceptable images include:

Watermarks from official video game news websites such as 4gamer or IGN are allowed since they were given permission to publish previews of the latest games by the developers themselves. However, please limit the amount of these images to a minimum.

Fan art is only allowed if the user puts the art on their talk page and if it was created by the user who uploaded it. Fan art of any kind is not allowed on pages about the official video games and it will be deleted immediately upon being discovered.

All pages on the Wiki should have at least one (1) category, usually within its respective game category. Do not over categorize. Major categories, such as Characters and Phantasy Star Media, only contain sub-categories in order to prevent clutter. 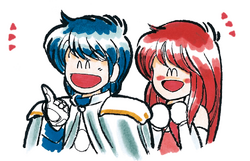 Trivia, also known as fun facts, are tidbits of information that are worth mentioning about a subject but do not necessarily mesh well into the main article. This section is usually found at the bottom of a page. Acceptable trivia includes:

Trivia should always be written in bullet points, which can be applied by typing an asterisk (*) at the beginning of a line in the source editor or by selecting bullet list in the toolbar.