Phantasy Star Online 2: Episode Oracle (Japanese: ファンタシースターオンライン2 エピソード・オラクル) is an anime adaptation of 2012's free-to-play online RPG, Phantasy Star Online 2. The series premiered on Japanese television networks on October 7, 2019. Funimation acquired the rights to simulcast the episodes with English subtitles to the United States, Canada, the United Kingdom, and Ireland audiences on the same day of Japan's premier date. New episodes can only be viewed on the day of release through their paid streaming service, FunimationNow, however the general public can watch episodes for free a week after release.

The series restructures the official story told from Phantasy Star Online 2 Episodes 1, 2, and 3.

The colony fleet called Oracle travels space in search of a habitable planet. The odyssey is organized by a large explorer organization called ARKS, whom are intent on seeking out and destroying the evil and destructive abominations that lurk the stars known as Falspawn (Darkers in the original Japanese version) so that the universe may someday realize peace.

Ash, a young cadet in the ARKS organization, becomes entangled one day in a situation during his graduation ceremony that would later decide the fate of Oracle and the very universe itself.

The anime series, Phantasy Star Online 2: Episode Oracle, was announced in PSO2 Station #29 on March 10, 2019 and at that time was scheduled to premier sometime in October 2019.[1][2][3] Funimation simulcast the series in English on their streaming service on the same day it premiered in Japan on October 7, 2019 for the United States, Canada, the United Kingdom, and Ireland audiences.[1]

The series restructures the official story told from Phantasy Star Online 2 Episodes 1, 2, and 3.[1][2] Information revealed at the Phantasy Star Thanksgiving Day 2019 held at the Kobe Convention Center on July 14, 2019 stated that the series will have 25 episodes[4] and the main character, Ash, will be voiced by Daisuke Ono.[5] The voice actors for other major characters from the video game Phantasy Star Online 2 will reprise their roles for the TV series.[6][3]

A special collaboration with the then-ongoing collectible card game, Phantasy Star Online 2 Trading Card Game, added the Episode Oracle Pack. It was released on Saturday, December 21, 2019. Upon purchasing the box set, customers received a half deck, booster packs, and a lobby action called "Summon" that was redeemable in Phantasy Star Online 2. Additionally, promotional variants of specific cards with artwork that resembles the images in the ending song, Timeless Fortune, were included in the box set.

Booster packs were also available for purchase that yielded cards with base artwork resembling frames from the anime.

Starting from February 24 through March 15, 2020, Sega's online mahjong game, MJ Series, hosted a collaboration event featuring characters from Phantasy Star Online 2: Episode Oracle in the app and arcade versions of MJ mahjong. During this time, players were awarded SP characters and table backgrounds for participating in qualifying matches. Additionally, the game held a PSO2: Episode Oracle gacha during the same time with the chance to win additional SP characters or a unique background.

Teaming up with the Princess Cafe during select dates in March and April 2020, the cafe's interior decor resembled the world of Phantasy Star Online 2: Episode Oracle. The eatery offered a special collaboration menu and exclusive retail goods for a limited time in the Fukuoka, Ikebukuro, and Osaka branches.

The original Japanese releases included item codes that were redeemable in the Japanese version of Phantasy Star Online 2 for unique in-game items. DVDs are differentiated from the Blue-Ray releases by having the DVD Video logo in the top right corner of the box art. 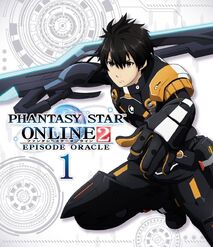 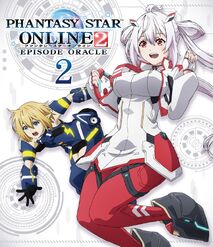 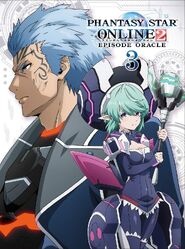 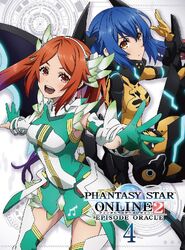 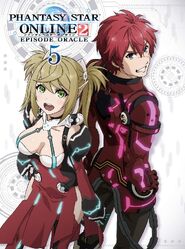 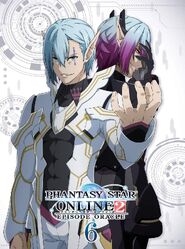 As a first press bonus, copies of the sixth volume came with an empty collector's box designed to hold the entire anime series. The episodes themselves are contained within nine individually printed volumes that are sold separately.

Collector's box
Add a photo to this gallery

Dark Falz Apprentice (Past)
Add a photo to this gallery

Concept artwork of the protagonist, Ash

Character cast with VAs from the official site. Includes each character's name written with the in-universe alphabet
Add a photo to this gallery 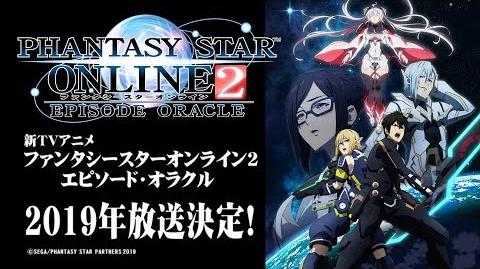 Retrieved from "https://phantasystar.fandom.com/wiki/Phantasy_Star_Online_2:_Episode_Oracle?oldid=41029"
Community content is available under CC-BY-SA unless otherwise noted.