View source
watch 01:36
We're Getting Mutants in the MCU - The Loop
Do you like this video?
Play Sound

Phantasy Star Online 2 (Japanese: ファンタシースターオンライン2) is a free-to-play online multiplayer game for PC, PlayStation Vita, PlayStation 4, Nintendo Switch and Xbox One. It was originally released to the Japanese market on July 4, 2012. During the same year at PAX 2012, Sega of America announced that they would bring the game to the west, however, they would not reveal any further information about the project until Microsoft's 2019 E3 conference, wherein the game is released in English on April 14, 2020 on Xbox One and on May 27, 2020 for PC.

A mobile "sister game" called Phantasy Star Online 2 es is available for iOS and Android. Playing the Japanese version of PSO2 and es using the same account will net player bonuses and perks, such as the "es Storage" feature.

A major graphical revamp of the game is planned to coincide with the release of its successor Phantasy Star Online 2 New Genesis in 2021.

Phantasy Star Online 2 was originally due to be released in late 2011 but was postponed for updates until 2012. Servers for use with the Japanese PC version opened July 4, 2012. A SEGA ID must be registered and activated to be able to access the game servers.

English-language versions for the South-East Asia (SEA) and Thailand (TH) regions were released in May 29 2014. These versions were closed down in May 27, 2017.

In 2018, a Switch version of the game was launched. However, it's not a full-fledged port; instead, it's a cloud-based service where the player is able to stream-play PSO2 through the Nintendo Switch, and thus requires absolutely stable internet connection to play properly. A Title campaign was instated with the released, which gives players a chance to earn The Legend of Zelda: Breath of the Wild-themed costume by playing the Switch Cloud version.

During Microsoft's conference in E3 2019, it was announced that a proper Western release of the game would happen in 2020 for Xbox One and Windows, with other platforms planned. Additionally, the game would release contents at a highly-accelerated pace, with the official roadmap planning for the first half of EPISODE 6 to be reached by the end of 2020.

The Closed Beta testing period started for the official western Phantasy Star Online 2 Xbox One servers on Friday, February 7, 2020 at 5 PM PST, and was scheduled to last until the end of the day of Saturday, February 8. Within the first hour, Ship 1 was filled to max capacity and the servers were hit with higher demand than anticipated. In order to combat some of the demand, Ship 2 was opened for character creation. An emergency maintenance was eventually issued to address the problems in the data processing program.[4] Since the conclusion of the maintenance, servers have been stable and operational. As a result of the extended emergency maintenance period during the beta test, SEGA extended the beta test until the end of the day Sunday, February 9, 2020 following a routine scheduled maintenance.[5]

The Western PC version was released on May 27, 2020 through the official Microsoft Store. In later July, it was announced that a Steam client would be released on August 5 that same year.

The Steam version was finally released on August 5, 2020. Accounts from the MS Store version can be transferred over to Steam, however both games are needed to be present on PC for the transfer process (the MS Store version can be uninstalled after the transfer is done). This release also came with a special Title campaign that lets the players to obtain costumes, accessories and Lobby Actions themed after certain Valve-produced games.

The following system specifications are recommended by Sega to play Phantasy Star Online 2:[8]

No purchase or recurring subscription fee is required to play the game. Subscriptions (in the form of "Premium Service") include access to additional game features, such as trading items with other players. Both subscribers and non-subscribers can make microtransaction purchases through ARKS Cash (AC). Another purchasable currency, the Star Gem, was added with the Episode 4 update. Unlike ARKS Cash however, Star Gems can also be earned normally in-game.

SPOILER WARNING
This section contains plot or ending details which could spoil the game for those who have not completed it.
SKIP SPOILERS SECTION

Phantasy Star Online 2 takes a departure from its predecessor by having its own continuity. Additionally, the story doesn't take place in a single planet or solar system; new planets to explore are added during the updates.

The plot of PSO2 concerns an intergalactic colony fleet called Oracle that travels through deep-space in search of habitable planets. The odyssey is primarily handled by a large explorer organization called ARKS (not to be confused with Arkz from the previous game). The player is a new recruit in the organization, who becomes tangled in a situation that will later decide the fate of Oracle and the universe itself.

New features in PSO2 that were not in PSO include the ability to jump over short obstacles and attack in mid-air, to take evasive maneuvers such as dashing and teleporting, and to hold buttons to charge up stronger versions of attacks and techniques (although this game mechanic was introduced in Phantasy Star Zero). Players are able to create their own combo attacks by chaining different Photon Arts and Techniques.

Gameplay is online and quest-based, with quests taking place in instances on a planet and in an area determined by the quest. Most instances are single-party and accommodate 4 players, but a few are multi-party and accommodate up to 12. The party matchup system allows players to search for and join parties running the same quest.

Each quest has its own objective, but some quest instances also contain "Emergency Code" events; short tasks with special clearance conditions and bonus rewards upon success. Unless stated otherwise, Emergency Codes are optional.

A party cannot return to the ARKS Lobby while a quest is underway. Instead, a small, private space called a Campship serves as a party's base of operations during a quest.

Client Orders provide additional rewards for undertaking various challenges on quests, such as defeating enemies with a certain weapon type, completing a quest within a time limit, or procuring enemy drops in a "fetch quest" style task.

Open-world instances are also available. These allow many parties to travel the same map and can potentially have a much higher player population than other quest instances. Enemies and Emergency Codes respawn in these open world instances, which is helpful for Client Orders.

Race and gender affect a character's appearance, voice, and stat growth, although unlike the original Phantasy Star Online and Phantasy Star Universe, the differences are not drastic. All race and gender combinations can access all of the available Classes. Former racial abilities, such as setting traps or casting Techniques, are now Class abilities.

Originally, there were only three races to choose from: Human, Newman, and CAST. On July 17, 2013, the Deuman became available in the new expansion, Phantasy Star Online 2: Code: Episode 2.[9]

In PSO2, Classes determine the weapons a player can equip, as well as their overall playstyle. A player can freely change their Class at the ARKS Lobby's Class Counter. Experience, stats, and skills for each Class are tallied separately. It is possible for a single character to reach the maximum Level in every Class, but only the stats and abilities of the currently selected Class will apply at a time.

Nine classes are available to choose from: Hunter, Ranger, Force, Braver, Bouncer, Summoner, Fighter, Gunner, and Techter; the first six are immediately available from the Character Creation phase, while the last three are formerly unlockables, but later update makes them available immediately from the Class Counter after finishing the prologue.

Starting from the Episode 5 update, Scion Classes (JP: Successor Classes; formerly "Advanced Classes") are introduced. Scion Classes require reaching Lv. 75 in at least 2 out of the 9 standard Classes to be unlocked. There are currently 4 Scion Classes to choose from: Hero, Phantom, Etoile and Luster.

The player may also complete a Client Order for a Subclass license, which allows their character to set a Subclass and change it at will, as with the main Class. Setting a Subclass adds a portion of the Subclass' base stats, all the Subclass' skills, and the ability to use Techniques, if the subclass is Tech-based. Scion Classes cannot use the Subclass perk.

The PlayStation, XBOX, and Steam versions of Phantasy Star Online 2 have obtainable achievements and trophies. Most of the achievements revolve around killing a certain boss in a single party area, leveling up different Classes, and weapon grinding.

There are many different types of costumes in Phantasy Star Online 2, some of which can be obtained by spending ARKS Cash or Star Gems.

Phantasy Star Online 2 received a CERO D (17 and up) rating due to sexual content.[10] Sexual content for the purpose of CERO ratings can include swimwear or other revealing costumes.[11]

The western version of PSO2 is rated M for Mature by the ESRB due to blood, partial nudity, strong language and violence with in-game purchases (which includes random items).[12] 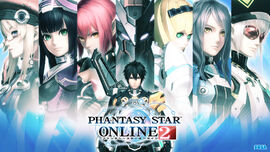 The Phantasy Star wiki has an extensive image & video gallery for this video game.