The game introduces the star system of Algo, and its three planets Palma, Motavia and Dezoris. The system is in the grip of its evil ruler, King Lassic. A young girl, Alis, sees her brother die whilst trying to investigate King Lassic, and swears to avenge his death by ridding the system of the evil influence of Lassic.

Alis is soon joined on her quest by Myau - a cat-like creature, Odin - a legendary fighter, and Noah, an Esper. Together they explore the planets of Algo, gathering mystical weapons and armour, battling with Lassic in his castle in the sky, and finally discovering the hidden darkness behind it all.

As with almost all RPGs, the main character, Alis, and her party are moved around the game world with the directional controller, and commands are given by accessing a menu system.

Combat is turn-based, with each combatant completing one attack or casting one magical spell during each combat round.

Dungeons in Phantasy Star are 3-dimensional, a revolutionary and impressive feature at the time. Most dungeons have multiple levels, and contain obstacles such as pit-traps and locked doors, as well as rewards such as treasure chests, unique items, or essential help from NPCs located in the dungeon.

There are four playable characters in the game; Alis, Myau, Odin, and Noah. They are controlled as one when navigating the surface or a dungeon, and individually during battle.

The items in Phantasy Star can generally be classified into 2 groups, combat-related (which are further divided into weapons, armour, and shields) and non-combat-related.

Of the combat Items, those made of Laconia are the strongest and therefore most useful and highly-prized. Laconian items are not available in any shop, and must be claimed from their hiding place or current owner.

There are two main types of weapon in Phantasy Star, which function quite differently in combat. Bladed weapons can make a single strike on a single enemy per combat round, whereas guns will hit every enemy once per round. Guns hit with a consistant power, but while the damage done by blades can vary, they tend to wound a single enemy more severely.

There are three weapons which cannot be bought in a store. The Iron Fang is guarded by skeletons at the bottom of the Iala Cave, the Laconian Sword is gaurded by a dragon at the top of a small island west of Bortevo, and Medusa has the Laconian Axe.

There are 2 armours that cannot be bought in a shop. The Frad Mantle is given to Noah by his master as a reward for defeating him in combat, and the Laconian Armour is locked away inside the Guaron Morgue on Dezoris.

There are also two shields which cannot be bought. The Mirror Shield is found on the small island in the inland sea of Motavia after learning of its being buried there, while the Laconian Shield can be found inside a chest deep in the Dezoris Cave.

Monsters are encountered randomly while exploring the planets' surfaces, and their dungeons and towers. Many can be communicated with in order to avoid a fight, though often a spell or item is necessary. Some monsters drop items such as flashlights, and a few are also able to use offensive magic or even healing spells.

In addition to the random encounters faced while exploring the surface of the worlds of Algo and the dungeons beneath, there are a few points in the game where a unique enemy must be faced.

After visiting the governor of Motavia for the first time, he bids you take a rest before continuing on your journey to seek out Noah. Succubus picks this moment to attack. A disembodied, demonic head, his attacks are devastating to Alis and her party, making for a very short battle. This fight is essentially unwinnable, but as it turns out it was only a dream. ...Or was it a premonition?

Dr. Mad is encountered in Abion. He posseses a laconian pot, which must be claimed (or reclaimed?) for use in an essential later stage of the game. Upon entering his dwelling, he orders you to give him Myau. Be sure to refuse! Myau's WALL magic is very effective at repelling his attacks, which can hit very hard.

The Casba (or Blue) Dragon is encountered by venturing down a side-path of the passage that leads to the town of Casba. It guards the Amber Eye, which is a valuable item to trade with.

Tarzimal (or Master Tajima) is encountered in the cave south of the lake on Motavia, where he lives. Noah is his student, and he challenges Noah to single combat as his final test. Tarzimal rewards Noah's victory with a Frad Mantle.

Medusa is encountered in her tower at the end of the mountain pass just south of Gothic on Palma. She appears just as she is described in Greek myth - with snakes for hair and the ability to turn people to stone with her gaze. She has the Laconian Axe, a powerful weapon which will surely be necessary in the fight against Lassic, but first a defense against her paralysing glare must be obtained. The battle should not be too difficult unless you hurry to face her at an early stage of the game.

The gold dragon guards Lassic's castle from invaders, and must be defeated before continuing on to the castle grounds. This is the only battle of the game which takes place in the air.

Shadow must be fought at the exact mid-point of the path towards the final encounter with Lassic. The fight can be quite draining, and serves only to weaken Lassic's adversaries, as Shadow himself comment: "Even if you defeat me you have achieved nothing, for I am only Lassic's Shadow!"

King Lassic is encountered in his castle above Baya Malay. He attacks purely with the use of THUN magic.

The mainifestation of evil in the Algol Star System. Dark Falz/Dark Force is a recurring villain in the series.

The events of Phantasy Star signal the end of the first millenium, and a long period of peace reigns. The story of the Algo star system continues in Phantasy Star II.

Phantasy Star has been remade and ported to various platforms. The PS2 game Phantasy Star Generation 1 is a vastly overhauled remake of Phantasy Star, prominently featuring updated graphics, story, dialogue, and gameplay with a variety of balance, aesthetic, and quality-of-life changes. The game also features arrangements of the original soundtrack as well as several bonus features, such as a sound test and the "Atlas" item, which automatically maps dungeons for a limited time. Generation 1 has only ever been released in Japan, but English fan translations have been released on the internet.

The game was re-released thrice as a port on the Sega Saturn, Game Boy Advance, and PlayStation 2 as a title in the Phantasy Star Collection compilation release. The Sega Saturn version included a hiragana text option not available in the original release, while the PlayStation 2 version, due to being emulated, allows for various aesthetic and gameplay tweaks such as adjustments to the graphics and changing Meseta and EXP drops from enemies.

Phantasy Star was later released as an unlockable game on the PlayStation 3 compilation Sonic's Ultimate Genesis Collection. To unlock Phantasy Star, you must defeat the first boss of Sonic the Hedgehog 2 (Drill Eggman) in 2-Player Mode.

An enhanced port of Phantasy Star was released for the Nintendo Switch in 2018, entitled Sega Ages Phantasy Star. This version of the game includes multiple additional features not seen in other versions of the game, including an Easy difficulty, a toggleable Auto-Map feature for dungeons, a bestiary called the Monster Codex that gives stat and drop info for all monsters, and a built-in pause screen that gives information on all items, equipment, and abilities in the game. The game also features an FM Sound Unit with 19 tracks for the player to listen to, as well as the hiragana text option from the Sega Saturn version of Phantasy Star Collection. 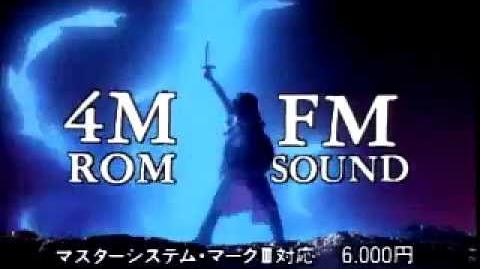 Retrieved from "https://phantasystar.fandom.com/wiki/Phantasy_Star?oldid=25627"
Community content is available under CC-BY-SA unless otherwise noted.