PSO2COMI (Japanese: ぷそ煮コミ), also called Phantasy Star Online 2 Comic, is an online gag comic series based on the free-to-play online multiplayer game, Phantasy Star Online 2, and illustrated by Pekeko. The comic follows the daily misadventures of a group of friends whose plights in-game are humorous and relatable to casual and hardcore ARKS alike. Although the Japanese original was primarily printed online in black and white, the comic was given a full-color makeover upon being localized to English. A new season of the comic, PSO2COMI NGS (Japanese: ぷそ煮コミNGS), which focus on Mitarashi and co.'s misadventures in Phantasy Star Online 2 New Genesis, started on June 9, 2021 and new chapters were published every Wednesday, with the English localized version started publishing from June 25, 2021.

The comic series was adapted into an anime of the same name in 2019. Select episodes were localized and dubbed into English in 2021.

Chapter not included in the volume release

The original Japanese releases included item codes that were redeemable exclusively in the Japanese version of Phantasy Star Online 2 for unique in-game items. The comics printed in these volumes are as they appear on the official Japanese website. 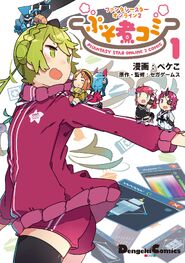 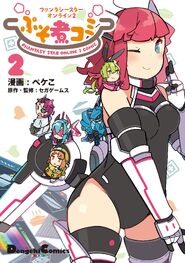 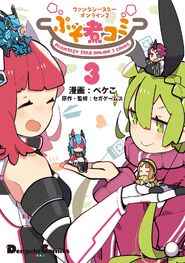