"A fell knight clad all in black, Odin roams paths long forgotten beneath the canopy of the Black Shroud.

...Ever vigilant as he sits astride his mighty steed, Sleipnir, it is said that Odin is driven solely by the desire to do battle with worthy foes."
— Official description from the Final Fantasy XIV promotional page

Odin (Japanese: オーディン) is a collaboration boss featured in Phantasy Star Online 2. Odin originates from the game's rival MMORPG, Final Fantasy XIV, in which he appears as one the game's major raid bosses. He is a primal given life by assuming the form of the host which takes his blade, the powerful Zantetsuken. Odin roams the Urth's Fount in Gridania's Black Shroud.

In most of his depictions, Odin is seen donning elaborate jet black armor and grasping his sword, Zantetsuken. He is usually accompanied by his steed, Sleipnir, in his never ending search for worthy opponents. 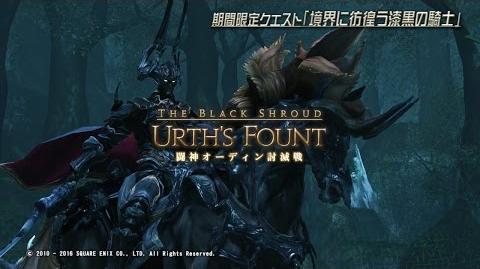