View source
This article is missing some information and requires cleanup. You can help Phantasy Star Wiki by improving it.
SPOILER WARNING
This section contains plot or ending details which could spoil the game for those who have not completed it.
SKIP SPOILERS SECTION

ARKS
#5 of the Council of Six (appointed AP 226)
Guardian

Matoi (Japanese: マトイ) is a character in Phantasy Star Online 2. She is a previous member of the Council of Six as the second Klariskrays, one of the Trio of Heroes. She currently serves as one of the two who holds the exclusive title Guardian.

Matoi is a rather gentle and soft-spoken girl. She possesses a strong sense of justice and compassion for others around her, and unforgiving towards those who dared to harm one of her own.

During her time as Klariskrays II, Matoi's personality was originally more spirited but still reserved due to her tendency to keep to herself. She was also incredibly ruthless and hard-handed towards the Falspawn and Dark Falz, yet, somewhat socially awkward.

Matoi is the second Klariskrays, the first successor to the original Klariskrays, one of the Trio of Heroes who sealed away Dark Falz Elder in AP 198.

Presumed dead after a Falspawn assault on an ARKS ship in AP 228, she appeared ten years later, having lost her memories as a result of photonic purification. She was then found by the protagonist, and began a road to recovery that ultimately lead to the restoration of her powers.

Later on, Matoi and the protagonist entered stasis for two years to clear their systems of remaining corrupted photons.

In Episode 4, she now works as a Guardian, performing auxiliary missions for ARKS.

Matoi is a special existence to ARKS and even among her fellow Council of Six members. She holds incredibly high photon potential, arguably one of the highest and strongest in ARKS.

During her time as Klariskrays II, she was shown as being capable of defeating those at the level of Dark Falz Apprentice with a single attack.

Matoi is also one of few people capable of utilizing photons within the ARKS ship, being an exception to the photon limiters in the ships.

Matoi has her own set of obtainable chips in Phantasy Star Online 2 es.

Following the defeat of Messala and the Liberation Army due to the combined effort of the Kingdom of Leoria and the Aries Chivalric Order, Crown Prince Elwin revealed that he had played both sides against each other and conspired to obtain the power of Dark Falz for himself in order to take the throne and rule with unrivaled power. The Aries Chivalric Order vows to stop Dark Falz from removing its final seal, the soul, and continues their race against time. Uly, the Commander of the Order's Guerrilla Squad, parted ways with his team to embark on a trial that his father, Theseus, planned for before his death. Uly is led to the Holy Land of Aero, a space station filled with technology unknown to the people of Vandor. His skills are tested by the Zodiart Clemens, a warrior who fought among the Argonauts that sealed Dark Falz twenty years ago. Upon boarding Aero, Uly learns about the history of Vandor's Vastness Age which was threatened to be annihilated by Dark Falz. In their time of need they were saved by the Gods, the same beings responsible for building the Aero space station. One such person who lived in the world of the Gods of yore had traveled through the Star Gate and appeared on Aero in order to test whether Uly is ready to confront Dark Falz: Matoi.

After fighting Uly, Matoi confidently determined that Uly had the potential. Clemens informed Uly that Matoi had traveled to Vandor via the Star Gate exactly when Dark Falz started to revive on Vandor. Unlike Phuramy, Matoi retained the memories of her world and knew the dangers of Dark Falz. Matoi informs the group that she believes that people are summoned to Vandor via the Star Gate for a purpose and believes that they are unable to return until that wish has been achieved. She offers to help Uly take the final trial to unlock his true potential as a warrior but will not assist the people of Vandor to fight against Dark Falz directly. She believes that the people of Vandor should not rely on others' power and need to learn to protect their own future by themselves. This is a belief that that person has been following, and Matoi wishes to uphold that belief, as well.

Matoi slowly descends from the sky when Ash arrives at a big tree on Naverius. She opens her crying eyes and, knowing Ash's name, asks Ash to kill her before she falls unconsicious in Ash's arms. After Ash and his group protect her from Persona, she is brought to the medical center.[3]

As Itsuki and Aika are entangled in battle with empowered Falspawn that have appeared in the civilian sector on the ARKS Ship, Matoi arrives to save them and instantly takes out all the Falspawn within the area. She heals Aika who is injured and issues a warning to Itsuki, telling him to be more careful, before leaving to eliminate the remaining Falspawn.[4]

Later on, Matoi appears to assist Aika and Itsuki with their fight against the revived Dark Falz Apprentice Gia.[5] It is mentioned off-screen that she saves Aika from being possessed by the defeated Apprentice by absorbing the corrupted photons from Aika's body. This forces Matoi to re-enter cryostasis to purge the corrupted photons from her system.

Matoi appeared in a collaboration campaign between Soul Reverse Zero and Phantasy Star Online 2 that ran from November 08 to November 20, 2018 alongside Quna and Io as limited-time event cards.

Matoi and Quna were added to Puyo Puyo Quest as part of the SEGA Collaboration Gacha event on June 23, 2021.[6] 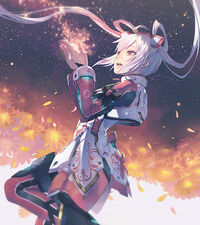