"Parents and children don't get to choose each other. Not much you can do... I'll just accept the fact that I got stuck with a troublesome father. Nothing worth complaining about any more. ...Pops... I'll be there soon. Wait for me!"
— Kranz before the final battle

Kranz is a major character in Phantasy Star Online Episode III C.A.R.D. Revolution. He is a member of the Hunters on a quest to find his father who suddenly disappeared one day. Although he has reckless tendencies and a quick temper, he is intensely loyal and will do anything for his comrades even in a pinch.

Kranz wears the standard RAmar outfit colored blue and white with a Yellowboze section ID placed to the left of his chest. He has spiked red hair slicked back.

Although his artwork depicts him with a frown, Kranz smiles in most cutscenes in the game and has a generally friendly, playful disposition. When he works with women in particular, he tends to flirt openly with them. He does not realize when they reciprocate those feelings, however, making him oblivious to their feelings, mostly in the case with his childhood friend, Ino'lis.

Kranz knows when to be serious, but, since he has a quick temper, he does have moments of recklessness where he dives into danger. Although he understands the consequences, he acts for the greater good of his team.

A recurring element is his forgetfulness about certain events in his life. Although this may make him appear to be forgetful, which he is as he admits he never knew the player's name, at one point in the story it becomes an important plot point for his character.

Kranz lived a rough family life when he was younger. By the time Pioneer II reached within Ragol's orbit, Kranz was born on Pioneer II as a natural born "ship child." Ever since then, his father, a hunter named Blitz, would adventure down to Ragol's surface and neglect his family for months at a time. To his knowledge, Kranz admits that he remembered more about seeing his father's backside than anything else about the man. His mother would eventually divorce from Blitz and take his older sister with her. Since he was very young when they left, Kranz does not remember how his sister looked or what her name was.

After his father retired from being a hunter, he started working as a makeshift detective. Much like before, he would disappear for long periods of time, however, Kranz became suspicious when months became years. Suddenly 2 years had passed, and Kranz decided that he was finished waiting and began looking for clues to his whereabouts. He came upon one lead that his father was exploring the ruins surrounding the Central Dome explosion. Since Kranz was now a member of Hunters, he was able to take a convenient mission to go on a monument watch quest in order to investigate.

During a brief confrontation with Arkz, Kranz will either be assisted by Ino'lis or a lady known as Kylria. With the two supporting each other, they are able to drive away their attackers. With the scuffle out of the way, Kranz would make small talk with Kylria about his motives for taking the quest before they go their separate ways. If Ino'lis assisted him, he would flirt with her and the two would have a heartwarming moment reminiscing about the days gone by.

Later, after the quest Tower Check, Kranz meets up with Kylria once again after a battle. Before Kranz returns back to headquarters, Kylria stops him and asks him to tell her his father's name. When he tells her that it is Blitz, she is surprised, saying that was also the name of her master whom also went missing two years ago. With this important discovery, Kylria knows that this is an opportunity that they cannot afford to pass and suggests that they work together in order to find Blitz. At this request, Kranz stutters. Kylria reassures him that Blitz was not one who would easily die, a statement which makes him chuckle at in agreement.

During an opportune moment in the quest Delicious Dish, Kranz comes upon the Arkz members, Peko and Creinu. He remembers that his father told him to search for them should something ever happen, and after cornering them in battle, he finally gets a chance to interrogate them. Although they admit that they teamed up with Blitz briefly, they mention that Kranz would be better off asking Kylria for more information since she knows more than they do, despite her being young enough to be his daughter.

After becoming more and more annoyed with them, Kranz eventually learns from Creinu that they received a message from Blitz recently, confirming him to likely still be alive. With some prodding by Creinu, Peko reveals that the message originated from Unguis Lapis. Creinu tells Kranz to give Blitz her regards before setting off an explosion allowing them to escape. Kranz coughs away the smoke and prepares to make the journey to his new destination.

Teaming up once more with Kylria during the Phantom Ship 3 quest, Kranz arrives in Unguis Lapis. With no other leads to go by, Kranz is skeptical but continues to search the area for clues. After the two find no signs, they are eventually startled by a message capsule activating nearby with Blitz' voice. He informs them that the capsule would have only activated if Kylria and Kranz were together. Unfortunately, he reveals that he was infected by the Germ from the Great Shadow, and the will of the Germ was the only reason it allowed him to return to Pioneer 2. He warns Kylria and Kranz to stay together and to be wary of coming in contact with the Great Shadow.

With renewed determination, Kylria and Kranz promise each other that they will continue searching and the former even offers to put in a request to allow them to travel together on missions in case other capsules would be just as trigger sensitive.

Time passes. In the events leading up to before the Morgue Attack conflict, the Hunters are notified that the Morgue has been invaded by Arkz members, leading to a mass evacuation of the premises. The Hunters quickly confront Break, who makes a declaration that the Arkz are not simply terrorists, but people that oppose the government in order to protect the sanctity and civil rights of Pioneer 2's citizens. As he is speaking, Kranz attempts to silence him by pulling out a handgun and aiming it at the FOmar. In that moment, the Hunter-turned-Arkz Ino'lis rushes forth in order to protect Break from harm. Taken by surprise and assuming that she was taken as a hostage, Kranz becomes furious, however, Break reveals that she turned to their side by her own volition.

Break continues, saying that the Germ is very dangerous, even the small amount used in order to make CARDs function. With a high infection rate, he is adamant that it is only a matter of time before an outbreak occurs. With there already being a vaccine shortage, the situation could become a disaster, therefore Break reasons that destroying the Morgue is the best solution for everybody and the Arkz will willingly destroy their own CARDs after they defeat the Great Shadow. Orland steps forward, saying that it is their duty as Hunters to stop Break. With that, the two sides engage each other in a war for the Morgue.

Sometime after the battle, the Arkz were able to successfully place a bomb. The field-lock is complete and the bomb begins counting down. In that short moment, Kranz realizes that they can stop the explosion if someone were to contain it with their own field-lock. Kranz immediately sprints for the bomb, shouting along the way, and makes a last minute dive.

Sil'fer and Ino'lis are helpless and can only watch as Kranz successfully contains the explosion with his body. After the rubble clears, Kranz' body is mangled into what Ino'lis can only describe as grotesque bits of flesh.

In Truth Seeker 4, upon being confronted by Sil'fer, Break tells her about his suspicions when he saw Kranz was still mysteriously alive after the explosion that he could not have possibly survived. Although he feels guilt for the man, not expecting him to do something so courageous, he knows that the government cloned him because he knew something valuable that the government wants. Sil'fer remains in denial, however, Break continues his explanation.

He reveals that CARD technology has the ability to clone people by placing a chip containing the memories of the original inside of a cloned body. When the brain of the clone synchronizes with the chip, the clone believes that all of the original's experiences and feelings are its own without ever realizing that it is not the original. Break tells Sil'fer that he knows that she is smart enough to know that the mandatory body scans are not simply for public health. They are actually scanning memories and storing valuable ones for safe keeping.

Elsewhere, in the Poachers quest, Kylria notices Kranz walking around as if nothing happened. He cannot help but laugh off her words, saying that he does not remember getting hurt and does not understand why everyone is worried about him. Kylria is glad to hear that he is well since she was worried, and tells him about a discovery in her research while he was resting.

According to her sources, Blitz was apparently the first person on Pioneer 2 to know the location of the Great Shadow. As she goes on talking about the technical information about the Germ and its properties, Kranz cannot help by feel his mind wander. He politely tells her that the information she found is interesting but complicated, and it does not concern him. Kylria counters by saying that with this newfound knowledge, she was able to determine that the last known location Blitz was seen was in the area that they are currently standing in. The surprised Kranz and Kylria duo discover another message capsule.

Blitz reveals that his body is fargone due to the infection by this point, and he is no longer able to freely move by his own will. As he begins the journey to the Great Shadow, he leaves this message with the coordinates to the Shadow's whereabouts and demands that they reduce the abomination to ashes. In his final words, he regrets not being there for Kylria and Kranz while he was alive and asks for forgiveness. As he attempts to tell them that the fate of mankind is in their hands, the capsule concludes.

Kranz is able to distance himself from Kylria in the moments before the final battle begins. He monologues to himself, with the hopes that, he has not angered her as a result of this. At this point he has accepted his father, and although Blitz was a jerk to him and his family, Kranz tells himself that there is no more time to complain about the past.

Before he departs for the finale, he asks for forgiveness from the Commander for never asking for their name. Although he tried to remind himself, he never got around to doing so. He reassures his father that he will be at the destination soon and asks him to wait for him until he arrives. 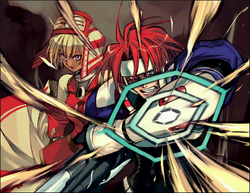 Retrieved from "https://phantasystar.fandom.com/wiki/Kranz?oldid=34369"
Community content is available under CC-BY-SA unless otherwise noted.