Kireek (Japanese: キリーク) is a HUcast from Phantasy Star Online. Perhaps the most popular of the template characters, he is a powerful android with a particularly dubious reputation. He is often referred to by his alias, the Black Hound (Japanese: ブラックハウンド).

Kireek's design is the standard HUcast template. He is a tall, purple android with a large chest and long legs. On his forehead are three yellow circles arranged in a triangle formation. His white face plate curves from his temples to his chin in an elongated V-shaped design. His intimidating eyes are curved upward at the edges and are a bright golden yellow with black near the sockets. The back of his head is pointed, similar to how a beanie folds. Kireek has no visible mouth.

The purple on Kireek's body appears to be protective plating built over a solid black body. It has many similarities to standard Government issued armor from classic Phantasy Star games. Near the joints and the design on his chest are white colored plates. On both of his arms appears to be a device of unknown use.

Usually blunt and serious, Kireek wholly believes in completing the job regardless of consequences. As he is Black Paper's executioner, he has no problems with killing an individual if doing so will complete his objective. Since he is usually paired with Sue in missions, this effectively makes her a moral foil to his fiercely logical way of thinking. Although he often comes across as unsympathetic, he does truly care about his so-called "rivals" that demonstrate an aptitude for combat. He reveals in a moment of weakness during his D-Cell corruption that his previous rival before the main character was a person from Pioneer 1, possibly referring to either Red Ring Rico, Heathcliff Flowen, or Donoph Baz.[1]

Kireek is the highly skilled and infamous android associated with Black Paper, the Government's top secret assassin organization masquerading as a criminal group. He is a high-ranking member that serves as the group's executioner, the Black Hound.[2][3] Skilled in close-range combat, Kireek's weapon of choice varies between the Soul Banish and the Soul Eater. During his off-time, he takes odd jobs as a hunter-for-hire for the Hunter's Guild.

Kireek is first introduced in the Hunter's Guild quest Battle Training, in which he is the partner to the main character and assists in the search for the client's cousin, Ash. He also serves as a teacher training the main character in the art of fighting the wild animals of Ragol. As the quest progresses, Kireek becomes increasingly impressed with the main character's performance for being a rookie. After successfully saving the injured Ash, the android begins to see a new rival in the main character and encourages them to continue training so that they may "impress him" one day.[4]

Shortly after the events of Episode 1, Kireek reappears in the Episode 2 quest Seat of the Heart. He and his coworker, Sue, have been summoned by the former government officer turned lab chief, Natasha,[5] in order to supervise the hunter adaption exam and, more importantly, observe the reconditioned Calus system reacting to Elly's presence on the virtual field.[6] Although Sue agrees to help the Chief in order to discover more about the MOTHER project, it is hinted that Kireek cares only about seeing the main character's growth in strength since the last time they met.

After Elly and the player manage to reach the Central Control Tower in an effort to help Calus create a physical body for himself, something goes wrong as Calus begins to go haywire. Kireek offers to help the player fight through the hoards of enemies in order to save Calus from evolving into a new lifeform, in effect disappearing and reincarnating into a new existence.[7] Delta, the MOTHER system that oversees this evolution, informs the group that Calus himself wished for this to happen and knew deep down that there was no chance that he could ever become human. After saying their goodbyes, the group finds themselves on Gal Da Val island's beach at nighttime. Before returning home, Kireek praises the hero for becoming stronger and cryptically adds that there is still fun to be had.[8]

Two years later, Kireek briefly returns along with his ever loyal companion, Sue, in the grand finale of Blue Burst's story. Still seeing himself as a mentor to the main character, the battle-hardened android offers some words of advice about the deadly mutants discovered around the crater. Afterward, he shares an important tip about WORKS, revealing that his source apparently discovered that the military organization is planning something reckless and continues his pursuit.[9][10]

Although not canon to the game's story, Kireek meets a tragic ending if the Kireek Subplot is played through to completion in the Hunter's Guild quests. After completing Battle Training and refusing to tell Sue your name in Unsealed Door, Kireek will reappear in Waterfall Tears, Black Paper, and From the Depths, growing increasingly deranged with each battle as D-Cells begin to corrupt him. [11][12] Once he is defeated in the final battle in the Ruins, the main character becomes the new owner of his weapon, the Soul Eater.[13]

Kireek makes several cameo appearances in the comical Phantasy Star Online: Blue Burst manga that ran on the official website before the game's closure. One story ponders how the cyborg eats, while another features the Black Hound assisting Shino in an epic battle against the sand worm, Saint-Milion. 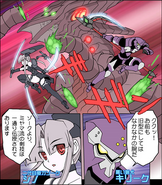