This article is a stub. You can help Phantasy Star Wiki by expanding it.

Ino'lis is a very cheerful person that loves to talk. She used to be childhood friends with Kranz and Sil'fer. While Kranz checked up on her regularly, it's been a long time since she last saw Sil'fer.

Ino'lis appears briefly in the quest, Blue Star Memories, from Phantasy Star Online: Blue Burst. She is seen standing near the deck of Pioneer 2 overlooking the giant windows that look out into space.

When approached, she briefly discloses a very personal secret with the player about her crush with Kranz, describing a recent moment that they promised each other that they would get married once they grow up. After her confession, verbally flushed and nervous with excitement, she informs the hero that "Ino'lis hunches often come true!" and continues to silently think about Kranz. 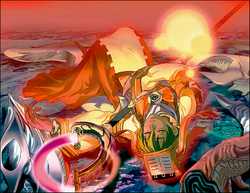 Retrieved from "https://phantasystar.fandom.com/wiki/Ino%27lis?oldid=34368"
Community content is available under CC-BY-SA unless otherwise noted.