This article is missing some information. You can help Phantasy Star Wiki by expanding it.

Humans are a race of creatures in the Phantasy Star universe.

They are more balanced than the android or newman races, with the ability to use magic (but not as powerful as a newman's) and without the ability to automatically regenerate HP or TP.

The various classes of humans are:

"The most populous race in the Gurhal system, humans are the progenitors of all the races.

Their strength, lifespan, and other characteristics are largely the same as that of humans in Earth, and their abilities are well-balanced."

Humans are a race of people in the Phantasy Star universe. Originating on the planet Palma/Parum, they have since ventered out into space to colonize other worlds and systems. Humans created the other three races: Newmans, Casts, and Beasts.

In Phantasy Star Online 2, Humans are one of the four races from which players can select from. Humans are the original entities from which ARKS was born; early in Photon research, it was discovered that Humans have the best aptitude for Photon control, thus making them the basis of all races. The Newman, CAST, and Deuman races were created by using Humans as a template. The other races were initially created to specialize in specific roles, but as research into the control of Photons advanced, the other three races evolved to possess Photon wielding capability nearly identical to that of Humans, thereby making their differences purely aesthetic.

Earthlings (humans of Planet Earth) are similar in capacity to the Humans that proliferate the Oracle colony. However, in addition to possessing hidden Photon capabilities that are not typically tapped into, Earthlings possess Ether potential, in that they can harness and utilize the power of Ether particles. However, like Photon potential, the ability to willfully harness Ether is usually not discovered by Earthlings themselves. Many Earthlings who harness Ether are able to access the world of Phantasy Star Online 2 through their avatar. 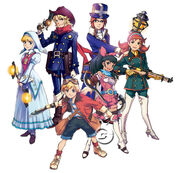 A human from PSO2's opening movie

Female Human (SRF Protector) for Phantasy Star Nova
Add a photo to this gallery
Retrieved from "https://phantasystar.fandom.com/wiki/Human?oldid=46919"
Community content is available under CC-BY-SA unless otherwise noted.