View source
SPOILER WARNING
This section contains plot or ending details which could spoil the game for those who have not completed it.
SKIP SPOILERS SECTION
This article is missing some information and requires cleanup. You can help Phantasy Star Wiki by improving it.

Heathcliff Flowen (Japanese: ヒースクリフ・フロウウェン) is deputy commander of the army of Pioneer I, and is the main focus of the Episode II storyline, which is to confirm whether he is dead or alive. He is a renowned master of swordplay, even teaching his ways to pupil Rico Tyrell. He wields his Sword, a version that has had many copies which are known as Flowen's Sword, and a Shot type weapon, as both of which are mutated into Olga Flow's arms later on and these mutated weapons can be used by players, though the means to acquire them is not currently accessible.

Copies of Flowen's equipment can also be found and equipped, namely copies of his sword, his Shield and his Frame. These can all be combined to achieve stat bonuses.

Heathcliff is first introduced in Episode II, creating a log of voice messages similar to Rico's. It is later revealed that the messages sent to the government were not actually previously recorded--but were sent in real time. He is the first (alongside Rico) to discover what Dark Falz is (which he refers to is as 'IT' in his logs) and he is heavily wounded by one of its spawns. This is no normal wound, however, as he contracts D-Cells (the base of many monsters) and the "Parasitic Gene Flow". The wound slowly grows and consumes his body whole, essentially acting as a leech. Believing himself to be dying, he admits his body to the scientists of Gal da Val island for research purposes, on the condition that two of his requests would be met. The first, being that Pioneer 2's migration to Ragol be postponed, and the second, to send a letter to his family and friends informing them of his death. These requests are not honored, and this sparks the incidents in Episode 1, namely Pioneer 2 witnessing the explosion on Ragol's surface.

Using samples from the wound, the scientists primarily sought to recreate the biological life forms that Dark Falz had created when he began to possess the wildlife on Ragol. Moreso they wished to control the specimens (later named Bioweapons) for their own selfish uses. Feeling betrayed by the government, Heathcliff begins to regret donating his body and realizes that neither of his requests were honored. This would mean that the Pioneer 2 colony would land upon Ragol with no idea how bad the situation actually was.

The scientists had one goal for Heathcliff's body; use it as a core for a D-Cell life form. They decide upon using the AI 'Olga' which was aboard Pioneer 1 supercomputer along with 'Calus'. They merge 'Olga' with Flowen's body, and allow it to be consumed by his wound entirely in hopes that it would allow them to control the life by means of using the AI. However, this goes horribly wrong as both Heathcliff and Olga are entirely taken over by the wound itself. The result becomes Olga Flow, the final boss encountered in Episode II. The name is most probably derived from the name of the "Olga" AI and "Flow" as a contraction of Flowen, which was the name also used to designate the particular infection that the military master suffered from.

Realizing that the experiment was a failure of exceptional proportions, the science team dispose of Olga Flow in the Lower Seabed Levels, an area appropriately named the "Test Subject Disposal Site", where the core of the AI 'Olga' once resided before it was recovered for the experiment. As Heathcliff says in his final log moments before his apparent death at the hands of his mutation, "I am powerless, yet I have everything. In this dark abyss, I wait for the savior of the red captive child. My destruction at the bottom of the deep abyss. I wait. Heathcliff Flowen."

However much about Heathcliff Flowen's existence inside of Olga Flow is still unknown, but the fact that the beast can switch forms from Flowen and that there seems to be some sort of intelligence behind the monster suggests that some sort of spirit is within it. This is confirmed in Episode 3 where the spirits of Flowen and Rico come to a compromise.

Heathcliff Flowen appears in several of the comical Phantasy Star Online: Blue Burst manga that were hosted on the official website before the game's servers closed. One story called "White Mustache" centers around a group of player characters discussing his facial hair's rarity among Pioneer 2 citizens. Other appearances merely feature cameos of the legendary Pioneer I commander. 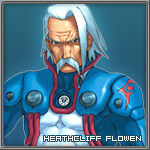 Mutated Flowen's sword after he is defeated in the final battle

Flowen's soul flies into the abyss

Community content is available under CC-BY-SA unless otherwise noted.