HUmar is a character class in Phantasy Star Online and Phantasy Star Zero. Characters in the HUmar designation include a Hunter, a type of class that specializes in melee combat, that is both human and male.

The HUmar is a melee class that boasts the most balanced growth per level in Phantasy Star Online and is therefore considered one of the easiest classes to pick up for newcomers to the series. A jack-of-all-trades, HUmar have the ability to cast certain techniques, however, they are unable to strengthen them beyond level 15. Techniques that are unlearnable include Shifta, Deband, Grants, Megid, and Reverser.

HUmar are able to wield a variety of weapons that each have their own uses depending on the situation in combat. These generally include: Sabers, Swords, Daggers, Partisans, Slicers, Double Sabers, Katanas, Claws, Twin Swords, Fists, Mechguns and Handguns. It is important to note that certain special weapons can only be wielded by specific gender and class combinations.

Materials are rare items that can potentially be found in each field. Upon using them, a particular stat will be boosted slightly.

HUmar are a melee class in Phantasy Star Zero. While they specialize in close-range combat, they can also learn a handful of techniques to assist them in battle. Techniques that are unlearnable include Jellen, Zalure, Grants, and Megid.

HUmar can use a maximum of 100 materials total.

HUmar can utilize the following techniques up to a maximum of level 10. 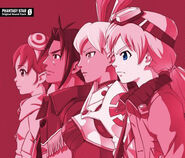 References in other media

Retrieved from "https://phantasystar.fandom.com/wiki/HUmar?oldid=30414"
Community content is available under CC-BY-SA unless otherwise noted.