"Commander, suppose that you had the 'Great Shadow's' power... What would you do with it? ...Do you know what limitless power like that can do to you? It makes you greedier and greedier, Commander. Sometimes that brings progress, and sometimes that brings destruction. ...... That... is 'its' will."
— Endu questioning the player before the Toward the Truth 2 quest

Endu (Japanese: エンドゥー) is a major character in Phantasy Star Online Episode III C.A.R.D. Revolution. He is a member of the Arkz that mysteriously appeared one day with no background information as simple as a birthdate available even to the government.

Endu is not a man who takes information by face value. He likes to question the majority and often interrogates his Arks companions for their opinions.

Endu wears the standard HUmar outfit colored gray and red. He has peach skin, deep blue eyes and short brown hair with bangs that hang over his face.

Being a sword wielder, Endu is seen frequently changing his swords out depending on the situation. He has been known to wield a Red Saber and Dark Flow into battle.

Endu is best described as a laidback thinker. Although he is not eager to wander aimlessly into any mission, he will volunteer his services if he has ulterior motives he wants to achieve. He never divulges his goals plainly to his superiors as he prefers to work in secrecy.

On his downtime, he enjoys chatting with his fellow Arkz companions and usually asks deep questions which get people thinking about the bigger picture. 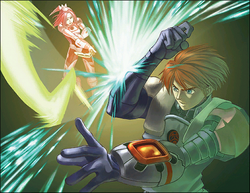 Retrieved from "https://phantasystar.fandom.com/wiki/Endu?oldid=34379"
Community content is available under CC-BY-SA unless otherwise noted.