Deumans (Japanese: デューマン) are a race of people that appear in Phantasy Star Portable 2 Infinity and Phantasy Star Online 2. They are distinguishable from humans by their unique horns and dichromatic eyes.

Unlike newmans and beasts, they are not the result of genetic engineering, but a natural mutation from humans. Their origins are unclear, but the citizens of Gurhal speculate the mutation originated as a result of the SEED incident.

Deuman physical traits tend to include a slight frame, pale skin, and light hair. Their most well known attribute is the ability to manipulate the photons in their body, something that every Deuman must keep in control by wearing an eyepatch to suppress their power. Deumans are known for their Infinity Blast power, which allows them to infuse the photons in their body into their weapons to give them a powerful burst of offense.

Deumans have strong offensive skills but low defensive attributes, and thus need to rely on evasion in combat.

In Phantasy Star Online 2, Deumans are one of the four races available for player creation, and the only race added after the game's launch. Unlike the Human, Newman, and CAST races, Deumans originally did not exist; a temporal anomaly at the end of EPISODE 1 effectively "rewrote" Deumans into existence.

Deumans, like Newmans and CASTs, were created from the Human race. Deumans came into fruition due to the sudden appearance of data during initial research into Photons. Due to the advancements in Photon control, Deumans now perform on a level near identical to that of Humans, making their differences purely aesthetic.

The physical appearance of Deuman is similar to that of their appearance in Phantasy Star Portable 2 Infinity. They are primarily denoted by their unusual skin color; while most Deumans are typically rather pale, their skin can range anywhere from blue to red. Other physical properties include the horn on their head; males have one horn, while females have two. The horn(s) functions similarly to that of a Newman's ears, being an "antenna" for Photons that enables them greater access to Photons at any given time. Some Deumans even sport a strange eye with a spiral pattern. It is currently unclear what the purpose of this eye is; it appears to be an aesthetic difference.

Deumans are a unique breed, having slightly higher stats in both S-ATK and R-ATK, the primary attributes of the Braver class. However, they have lower DEF stats and HP in return. Between races, the differences are practically nominal, with only a few points difference between them.

Closeup of their unusual eye

Image showing a spelling of "DEUMAN" in PSO2 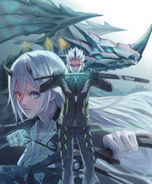 Illustration used for the Episode 2 Guide