Start a Wiki
This article is a stub. You can help Phantasy Star Wiki by expanding it.

Creinu (Japanese: クレイヌ) is a character in Phantasy Star Online Episode III C.A.R.D. Revolution. She is a member of the Arkz anti-government organization.

She has been with the establishment since its inception, and even has important connections with Arkz' top investor. Due to her extensive knowledge of the Arkz and Pioneer II's underground operations, Creinu is likely either affiliated with or part of Black Paper. 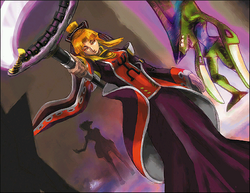 Retrieved from "https://phantasystar.fandom.com/wiki/Creinu?oldid=34353"
Community content is available under CC-BY-SA unless otherwise noted.