"The legendary pizza that time shaped into a weapon! Enjoy! It's bombalicious!"
— Message pack inside the Coco Hut

Coco Hut (Japanese: ココ・ハット) is an establishment in the Phantasy Star franchise. Making its first appearance in Phantasy Star Zero, the Coco Hut Pizzeria is attended by the cheerful employee dressed in an iconic orange suit as cheesy as the pizza she serves.

In Phantasy Star Zero, the Coco Hut pizza shop is a hidden encounter in the game similar to monster battle arenas, Usanny nests, and the Naura Bakery. It can only be found by offline solo players in both single player quests and fields. The only two fields that it has a very rare chance of appearing in are Arca Plant and Dark Shrine, both of which are two of the final dungeons in the game.

Similar to the Naura Bakery, Coco Hut only appears in dead-end areas of the field and, when found, the player automatically enters the building without needing to defeat enemies. Although Coco specializes in pizza, she offers a variety of other goods in her shop including:

If this was the player's first encounter with the Coco Hut, the player will achieve the title "Pizza Freak" upon talking to the bank counter in Dairon City. The reward for this achievement is 10 Photon Drops. Titles are account bound, so they may only be received once per Phantasy Star Zero game cartridge.

A pizzeria with a similar attendant reappears years later in the game, Phantasy Star Portable 2. In this game, the pizzeria was part of a Japanese exclusive collaboration between Sega and Pizza Hut. Besides the variety of cheese delicacies in the shop, the pizza employee also offers room goods in the form of Pizza Hut of Japan's official mascot, Cheese-kun.

Beyond the real world Pizza Hut collaboration, Phantasy Star Portable 2 had another collab in which they teamed up with KFC in order to include the Kentucky fried chicken stand's iconic mascot, Colonel Sanders, in the game.

Front view of the pizzeria in Phantasy Star Portable 2 Infinity

Side view of the Pizza Hut stand in 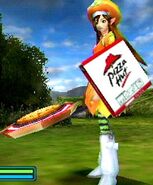 Close-up of the Pizza Hut weapons