"I will make sure that my brother died not in vain! Watch over and protect me Nero!"
— Alis vowing to avenge her fallen brother in the prologue

Alis Landale (Japanese: アリサ), known as Alisa in the Japanese version, is the heroine of the first millennium, saving the Algo star system from the evil influence of Dark Falz.

Alis wears a pink dress with short sleeves. In most depictions, she wears a purple chest plate and shoulder pads with gold detailing. In others, she is seen wearing green armor with gold details. She wears a matching pair of gauntlet style bangles on her wrists and light yellow tights with long white boots. She has auburn brown hair styled with a pink headband. Her sword is tinted silver or blue.

Alis is shown to be determined and headstrong primarily in her mission to reclaim her brother's honor and saving Algo. She is shown to be caring by helping Myau find Odin and recovering him from Medusa's curse.

Little is known of Alis' early life aside from the fact that her parents were killed and she was orphaned, causing her older brother Nero to care for her and himself.

At the age of fifteen, Alis sees her brother joining a revolutionary group. But her brother is killed by King Lassic's Robot-Cops. Alis finds her brother and in his dying breath, he asks her to try to discover Lassic's plans. As he dies, she swears to avenge his death.

Alis sets out on her mission, and meets and befriends Myau the musk cat, Odin the warrior and Lutz the Esper. Her mission changes from revenge to saving Algo as she travels through the Algo solar system.

Long after her death, she appears in the dreams of an agent named Rolf Landale, fighting the first Dark Force, before he begins his quest to defeat the second millennium's rebirth of the Dark Force.

It is here that is revealed Alis' family name - Landale. Visiting the town of Termi, Chaz Ashley comes across a statue of the heroine 'Alis Landale'. Since both her father and brother were killed in the first millennium, it is likely that the family name was not passed on to Alis' descendants.

Alis also appears to Chaz when he ventures to find Elsydeon, the ultimate sword. As Chaz touches the sword, memories of all the previous Protectors of Algo come to him telling him of his mission and giving him guidance - including Alis.

Alis has a basic offensive spell in the form of fire however she is not as proficient in spells as Lutz and Myau are. Instead, she focuses on mitigation abilities to stun the enemy or speak with them in order to learn information, and mobility spells to easily travel to each destination.

Of the three adventure titles published by Futabasha for the Phantasy Star original classics, one of them was a choose your own adventure story about Phantasy Star. Featured on the cover is Alis and her friends in slightly modified costumes.

Depending on the reader's choices, the ending and situations Alis finds herself in could change drastically from the events of the video game. The game books were only published in Japan.

One of the main characters from the video game Segagaga is a blonde woman with glasses named Alis that works as a secretary for the Segagaga project.

Near the end of the game, she abandons her secretary disguise along with her agents, Lutz and Odin, and arms herself with a suit of armor, sword, and shield in order to fight against Dogma alongside other Sega members.

A counterpart of Alis Landale with the same name appears in Phantasy Star Online 2. In this game, she is a descendant of an ancient hero and niece to the tyrannical king, Lutz Cero Ray Cuent. He is the ruler of Cuent, a kingdom situated within the alternate dimension of Omega that exists parallel to that of Oracle.

Alis Landale, along with Lassic, Rolf and Wren, made their debut appearances in the soft launch mobile puzzle game, Sega Heroes, on October 22, 2018.

In this game, Alis is a legendary Yellow Hero that comes equipped with three abilities: Shield Bash, Fire, and Warrior's Spirit. The flavor text for each level 1 ability can be found below.

Shield Bash: Alis bashes the target with her shield.

Fire: Alis conjures a fireball and throws it at her opponent. 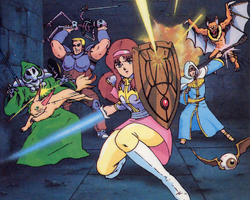